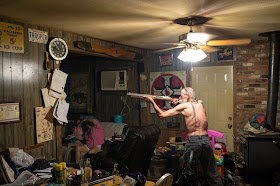 The Ku Klux Klan (KKK) was one of the largest and most respected, civil society organizations in the history of the United States during the height of its reign and influence during the 1920s. White men of the professional classes--doctors, lawyers, teachers, and others--were members. The Klan had women's and children's auxiliary groups. A President of the United States was rumored to have taken his oath of allegiance to the Klan while, quite literally, in the White House.

The Ku Klux Klan also led one of the largest public gatherings in United States' history when they convened a march of between 50-60,000 people in Washington D.C. in the year 1925.

At present, the "respectable" members of the Klan must be looking down in shame and horror at the caricature, backwood, "poor white trash" figures who pass for the "day-to-day" life of the KKK, as featured by the news website and online magazine Slate.

And there must also be an irresistible temptation for anti-racists, liberals, progressives, and other reasonable folks to mock and laugh at how low the Ku Klux Klan has fallen in post-civil rights America: this is understandable given how the white people depicted in Slate's recent story about Anthony Karen's work with the KKK are a better fit as the rub of a joke in the TV show Family Guy, than as the 21st century faces of the largest and most dangerous domestic terrorist organization in the history of the United States of America.

Images of white racists shooting roaches with guns, getting married in self-made Klan regalia, or eating fattening diabetes-causing food at a historic Civil War battle site are rich in comedic potential. Laugh if you would like. 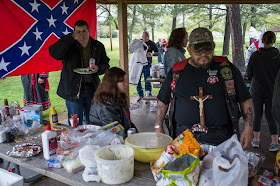 But, do not forget that the KKK chose its uniforms to scare freed blacks as the original walking dead, Confederate ghosts who wander the terrestrial plane, forever seeking revenge on those who "betrayed" the Southern cause.

The Ku Klux Klan killed many thousands of people; they were not day traders or amateurs; the KKK was "murder incorporated", helping to enforce a regime of racial terrorism throughout the United States.

White supremacy is a ghost too--one that is very crafty and illusive.

At present, racism is institutional (and not primarily inter-personal).

Cartoonish images of a broken, poor, backwoods, and anachronistic Ku Klux Klan are perfect for a country where a black man is president and racism is "color blind." Thus, a defeated KKK is a stand-in for the vanquishing of racism. The simplicity and shortsightedness of such an understanding ironically does the work of white supremacy in post-civil rights America, as opposed to being a triumphant moment when we can write an epitaph for White racism.

White supremacy remains one of the dominant ideologies in the United States. Its power is manifest in many ways.

So called "stand your ground" laws are racially discriminatory and in practice legitimate the extrajudicial murder of people of color by whites.

The prison industrial complex is, as Michelle Alexander has so sharply described it, "the New Jim Crow."

The Great Recession has disproportionately destroyed the wealth and income of African-Americans and other people of color. Moreover, racist lending practices wherein banks and other financiers charged higher interest rates for people of color with the same or better credit scores and resources than white borrowers.

Racism compounded with the greed of the banksters to create a double insult and violation for people of color that has further hampered the nation's recovery from the Great Recession.

Employers continue to discriminate against African-American applicants because of their "black names".

Voting rights that were won with blood are being assaulted and rolled back by the Tea Party GOP.

The Southern Poverty Law Center has documented a rapid increase in the number of White identity organizations, White hate groups, and militias since the election of Barack Obama. There have also been a record number of threats against the life of the country's first black president.

Shadenfreude--what is the mocking and enjoyment at the earned failure of others--towards the Ku Klux Klan makes its detractors feel good, as the Kluxers are certainly most deserving of the condemnation of history and whatever misfortune and bad luck befalls them. However, focusing on those members of the KKK who chose to be featured in a less than flattering pictorial essay is a distraction, a magic trick, and the "Three Card Monte" of race and equality in post-civil rights America.

The Ku Klux Klan is an obsolescent political organization: it is unnecessary when the Republican Party is the United States' de facto party of White Identity and White political interests.

Americans must also be weary of stereotypical white racism as depicted in David Rosenberg's story about the KKK in the Age of Obama. Why? Because in a chess match a player should immediately be suspicious when they are given exactly what they want--and expect to see--from their opponent.

Working with that analogy, I am less worried about the sad soul Ku Klux Klan members in Slate's feature than I am about those others with like racist allegiances who work as police, attorneys, doctors, bankers, teachers, researchers, real estate agents, in the military and government, or as scientists. The latter group have and do impact the lives of their racial enemies everyday in the United States. They find cover behind the easily and readily identifiable white supremacists who wear white sheets and allow themselves to be interviewed by the press.

Mock the white people in "A Day in the Life of the Ku Klux Klan Uncensored" at your own peril. They are racist killers both in their dreaming and in practice.
chaunceydevega at 2:38 AM
Share